If you live in the vicinity of Enright Park(let) you most likely received multiple letters from the City of Pittsburgh this weekend regarding two proposed street vacations. We thought that it would be good to try to explain what these mean so that everyone can make an informed decision about whether they support or do not support these proposals.

First, what on earth is a street vacation??? For this, we go to Wikipedia:


"A street vacation, also known as an alley vacation or vacation of public access, is a type of easement in which a government transfers the right-of-way of a public street, highway or alley to a private property owner."

This means that the City is considering legislation to vacate two portions of streets to the owner of the former Penn Plaza site, LG Realty (also sometimes referred to as "Pennley Place South" or "PPS" which is the name of the development entity for the site).

So what portions of what streets?

Council Bill #2019-1911: Resolution Vacating a Portion of Penn Avenue and South Euclid Avenue
The first proposed vacation is for the speed lane at the intersection of Penn Avenue and South Euclid, aka Penn Circle West. You know, the right turn lane that currently allows drivers to by-pass the light and keep moving onto South Euclid, generally at a high rate of speed. Eliminating the speed lane and reintroducing a more traditional intersection design has been discussed for some time, and has been part of the strategy for deconstructing Penn Circle for at least ten years. There is no surprise here and representatives from the neighborhood have endorsed this proposal.

Council Bill #2019-1910: Resolution Vacating a Portion of Eva Street
The second proposed vacation is for an 8-foot wide section of Eva Street to be vacated to the developer. This has NOT previously been made known to the neighborhood, and is part of the developer's intended plan to build a new PRIVATELY owned Eva Street to replace the existing Eva Street. A few key points here:
Why do we feel that Eva Street must be public? For several reasons:
While the developer has attempted to reassure us and the City that they will not limit access, we are frankly concerned as to any additional consolidation of site control by a private entity in the neighborhood. Remember, much of the reason we are in this mess to begin with was site consolidation and the privatization of public rights-of-way (aka the elimination of the street grid) back in the 1960s. It may seem "minor" to privatize another street, but it sets up a move towards increased privatization that is detrimental to both the near future and the long term for the neighborhood. 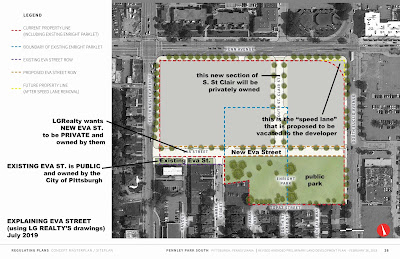 So what does this mean? If you support the vacation of these streets, by all means, write a letter of support! If you have concerns or are opposed to one or both of these proposals, please write to City Council! Letters can be sent to the attention of the City Clerk, 5th Floor, City County Building, 412 Grant Street, Pittsburgh, PA 15219.

And in either case PLEASE plan to come to the public hearing. The hearing will be held:

We will post the full text of the legislation once we get the chance to get it all scanned, but feel free to visit the City Council's Legislative Information Center at: pittsburghpa.gov/clerk/lic.
Posted by halushki at 7:54 PM