Fundraising for the NEXT Round of Legal Struggles

Please make a contribution to this fundraiser that Bloomfield Garfield Corporation is hosting in order to raise legal funds to ensure that we really DO have a park in our community once the former Penn Plaza site is redeveloped!

This legal fund will allow groups to go to court and ensure, when the new retail-office complex at former Penn Plaza Apartments opens, there is an Enright Park sitting next to it, with unfettered access for the public. http://ioby.org/Enright 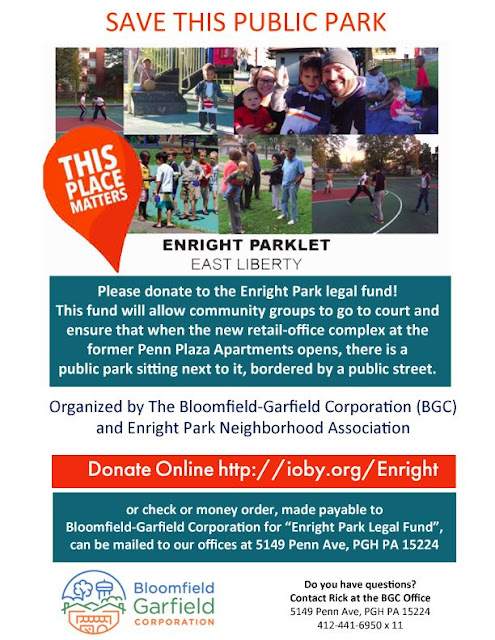 The battle to preserve Enright Park in East Liberty continues!
This fall, the fight will shift to Orphan’s Court, a division of Common Pleas Court, as a judge hears the City’s petition to authorize the exchange of land with Pennley Park South, Inc., that will give them the final piece they need to construct their large office-retail development in East Liberty. But at what cost to the public?

Nowhere in the City’s petition will there be a guarantee that a new, reconfigured park will emerge as the first phase of the commercial development comes out of the ground. Nor will it ensure that when the park is finished, the public will enjoy unfettered access to it. And we're still waiting to see when and how a community process is put in place to oversee the use of tax dollars generated by the new development in funding affordable housing nearby. It’s a complex set of terms and conditions the judge will be asked to review, and we, as community groups, believe we need to be in the room as those deliberations take place.

To be heard in that courtroom means hiring attorneys to represent the interests of the larger public, and that takes money.

The Bloomfield-Garfield Corporation (BGC), together with Enright Park Neighborhood Association, are creating a legal fund for just that purpose, and we need your support.

Please consider making a tax-deductible contribution to the BGC so that the public is not left holding the short straw when all of the dust has settled.

For more background on what’s at stake with this fight, please visit the website, enrightpark.org.

Thank you in advance for your donation to this important cause!

To be heard in that courtroom means hiring attorneys to represent the interests of the larger public, and that takes money. Once the Money is in hand it will go directly to the attorneys who are briefed and ready for the case.

why we're doing it

We are doing this because Parks are important. Nowhere in the City’s petition will there be a guarantee that a new, reconfigured park will emerge as the first phase of the commercial development comes out of the ground. Nor will it ensure that when the park is finished, the public will enjoy unfettered access to it. It’s a complex set of terms and conditions the judge will be asked to review, and we, as community groups, believe we need to be in the room as those deliberations take place.
Posted by halushki at 3:29 AM 2 comments:

Re: Council Bill #2019-1910 Resolution Vacating a Portion of Eva Street

The Bloomfield Garfield Corporation, Enright Park Neighborhood Association, and Friendship Community Group wish to reiterate their longstanding opposition to the privatization of the planned reconstruction of Eva Street, of which this proposed street vacation will be a part. We therefore formally object to Council Bill #2019-1910.

As the attached May 12 letter to Mayor Peduto indicates, our opposition to the privatization of Eva Street centers upon the need to provide unimpeded public access to the reconfigured Enright Park, which the proposed Eva Street will front for most of its length. As we stated in our May 12 letter:

Regardless of easement agreements or other legal covenants for the new street (which we note were not contained in the final land development plan), management and control of Eva Street by a private entity creates a foreseeable risk that park-goers and others will be subject to arbitrary rules pertaining to their use of the street. Further, if such rules are enforced by a private security force, there will be many opportunities for careless or deliberate abuse of such authority.

Despite our repeated requests for the text of the proposed easements which will govern public use of the privatized Eva Street, they have not been shared with us to date. We regret that the planning process for this street privatization has been opaque and closed to participation by community stakeholders. We wish to strongly reiterate, however, that no easements or other legal covenants can substitute for the rights of city residents and others to freely use a street policed and maintained by the City of Pittsburgh.

We note that the new Eva Street will be built using public subsidies through the East Liberty Transit Revitalization Investment District (TRID). As our May 12 letter indicates, we are unpersuaded by the reasons that the developers of Pennley Park South have used to justify privatization of Eva Street: maintenance of underground stormwater infrastructure and periodic use of the street for special events are both activities which are accommodated elsewhere in Pittsburgh on and under public streets. We see no reason to make an exception here.

The risks of arbitrary private management and policing of this important new piece of city infrastructure will extend far into the future. We urge that City Council reject this proposed partial street vacation and support construction of the new Eva Street as a public right of way.